most powerful financier in the world. Mix in two ounces of America’s most treacherous female spy. Stir in betrayal and love. You have Room 1515.

Have you ever felt unsure of your financial future and the future of your country? I have. Greed drives decisions, and greed driven decisions are always short-term. Let us say a shrewd group of power players is manipulating the world economy to accumulate long-term wealth. They could rule the world. I do not fear the 1% crowds protest against. I fear the .0001%. You have never heard their names. However, you know they exist. One man will emerge to lead them. I have written Room 1515 with this premise in mind. Winner of the OWFI – Mystery Thriller Competition 2011
—
MADNESS – THE PEACOCK TRILOGY – BOOK 2 On the brink of World War III, the agent who can stop the madness is going insane! The implant Doctor Kolb placed in Agent Peacock’s brain is slowly deteriorating. When Peacock goes on a mission to kill Thomas Reed, the erosion escalates. Reed reveals the truth to her. Because she stopped the assassination attempt on President Monroe, Arthur Pendleton will fire the U.S. Space-based missile systems. Millions will die, and it’s her fault. Peacock kills Reed and disables her programing. Before she goes completely mad, Peacock sets two goals. Punish Kolb and those who took her child from her, and stop the missiles from launching. Pendleton pinpoints his targets. He will execute his plans for world domination at the expense of human lives. He selects a medical team capable of removing Peacock’s implant. Even knowing she is trying to thwart his plans, his love for her is unwavering. He sends his best man to find her and bring her safely to him. Will she destroy Pendleton’s plans and prevent the madness of war? Or will Pendleton save her life and rule the world?

MADNESS: THE PEACOCK TRILOGY – BOOK 2 by Bill Wetterman has everything fans are looking for: intrigue, adventure, danger, excitement, conflict and romance. A great read!

The writing moves the story along well with considerable skill. The tone is unflinching, but appropriate to the story. Although the main character is a female, I think men would still enjoy the story. In fact, because of the tone and the fact Peacock is tough herself, I imagine the story might actually find more male than female readers.

All in all, a satisfying read with great elements. Kudos. “The prostitute reduces you to a loaf of bread, and the adulteress preys on your very life. Can a man take fire in his lap without his clothes being burned?” – Proverbs 6:26-27 (NIV) Busted – The Odyssey of Holly Bunn

Holly Bunn has spent her whole life crawling out of hell. She owns a Porsche, a condominium, and tons of size 4 clothes. Except for her wealthy Orlando clients, she’s a loner. Her face and figure pay the bills. By forty, she’ll need to have enough saved to retire. In her line of work, she’s responsible for her own retirement plan. A runaway at 12, she and God talk about starting a halfway house for victims of abuse. God protects Holly, whoever God is. And with His assistance, maybe she can help others.Problem—a guy has entered her life—a gorgeous man with a sweet personality. But business trumps love in her world. She has a goldmine deal coming down—a working girl’s dream. If God understands and forgives her, so should her boyfriend. After all, what’s the worst that can happen? He knows what she is. 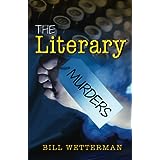 Literary agents and Phil Waters, a thriller writer, have had an ongoing war for years. Despite winning numerous contests and awards, agents reject his ideas and his novels. When talking to an agent at the Southwest Authors’ League Writers’ Conference, the agent tells Phil, “Not believable! Death by treadmill? Silly. Not interested,” and he ends Phil’s interview session. Phil burns with anger. The next day, Phil goes to the hotel exercise center to work out. Who should be running on a treadmill, but the agent who insulted him. The electric cord supplying the machine is plugged in to the wall next to Phil just as it is in his book. To pull the plug or not to pull the plug. That is the question. Never act on impulse. You can’t take it back. http://www.amazon.com/Literary-Murders-Bill-Wetterman/dp/1500640131/ref=la_B00847S5GC_1_1/177-6510247-1429169?s=books&ie=UTF8&qid=1421939380&sr=1-1 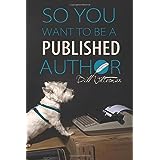 Everyone has a book inside them. Most people never write it down. SO YOU WANT TO BE A PUBLISHED AUTHOR is for those with a burning desire to have the public read their work, but don’t know how to go about it. It is also for those who thought they knew and failed miserably. That was me a few years ago. Learning the craft of writing is not for the faint of heart. This book will cover all the things you need to do to publish step by step. I hope you come along for the ride.

3 thoughts on “Books In Print”